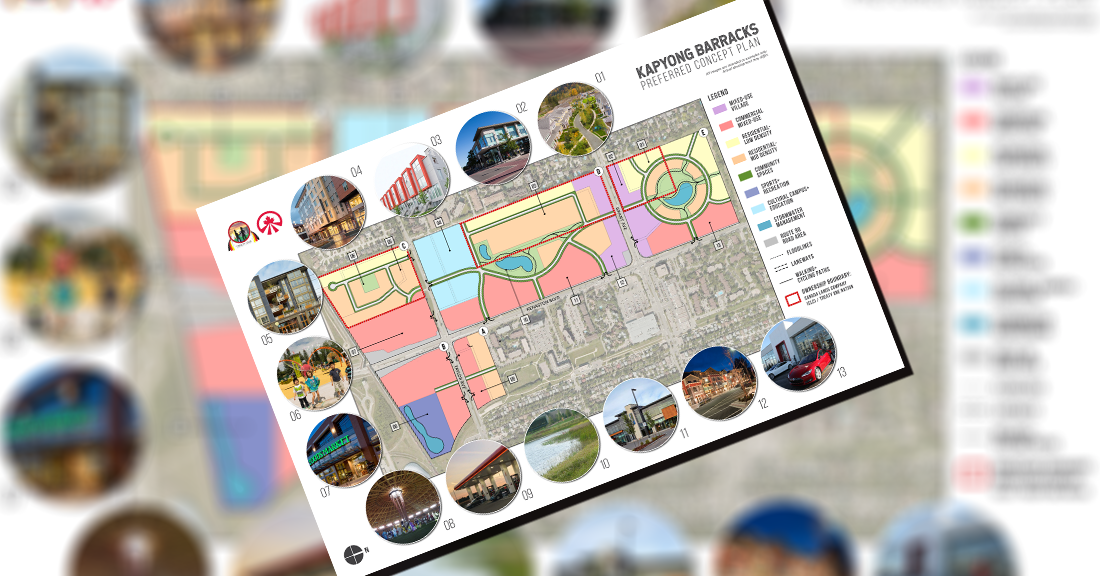 October 22, 2020 – Thanks to extensive input from Treaty One First Nations members and Winnipeg neighbours, the preferred concept plan for the redevelopment of the former Kapyong Barracks has been unveiled.

In what has been described as the highest number of participants in an engagement initiative in the 25-year-history of the Canada Lands Company (Canada Lands), over 3,000 Manitobans completed surveys, logged in for a major virtual presentation and participated in sessions in each of the seven Treaty One First Nation communities.

“This level of engagement is exciting,” said Chris Elkey, Vice President, Real Estate West of Canada Lands. “After we had to cancel our in-person information sessions due to the pandemic, we innovated and turned to virtual options. The response has been outstanding.”

Survey and feedback results pointed to strong support for the re-development project with a full 74% of respondents agreeing that the project is headed in the right direction with just 3% disagreeing.

“Most striking about the advice offered was the consistency in views,” said Whelan Sutherland, CEO of the Treaty One Development Corporation (T1DC). “As a key priority, those who participated want us to create a community that will be well integrated with the surrounding neighbourhoods.”

Sutherland said people really believe in the importance of a mixed-use approach to ensure the community includes places to live, shop, work, and learn. He also pointed to the strong desire to incorporate green space and accessible transportation options for bus, cyclists, and pedestrians.

“This is about creating an environment that blends well with existing neighbourhoods while balancing sustainable economic opportunities for Treaty One First Nations,” Sutherland concluded.

Based on the extensive feedback received, the Preferred Concept Plan integrates and addresses many of the ideas and concerns shared during the public engagement process. In summary, here is what we heard:

Heard: Worries about increased traffic on residential streets
Developed: A plan to manage impact on traffic in surrounding neighbourhoods

In terms of next steps, technical teams have been engaged to create transportation, stormwater, and wastewater plans for inclusion in the Master Plan. Once completed and approved by the ownership group likely at the end of 2020, Canada Lands’ 51-acre/20-hectare portion of the site will proceed as a Secondary Plan for review and approval by the City of Winnipeg.
-30-
For further information, please contact:
Preston Roulette, Communications Manager at T1DC, inquiries@treaty1.ca
Chris Elkey, VP Real Estate (West), Canada Lands Company, 403-681-1477, celkey@clc.ca

About Treaty 1 Development Corporation
The mission of the T1DC is to advance the economic and social well-being of the citizens of Treaty One. It is responsible for planning, developing, and managing 109 acres at the former Kapyong Barracks Site. Governance oversight is provided by a Board comprising the Chiefs of the seven Treaty One First Nations. For more information, https://treaty1.ca